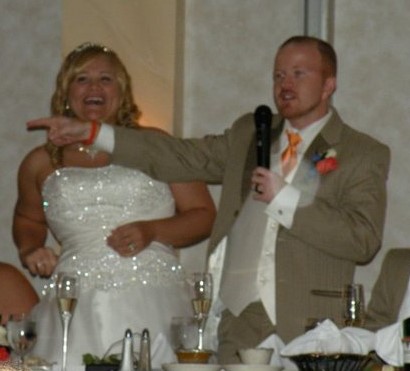 I originally wrote this last year to make it easier for me to relive my wedding day. If people wanted to read it, who am I to prevent them that joy? So here I am, re-sharing this story, as I will continue to do until the end of time.

Editor’s note: It is now just the fourth best day of my life.

I consider the day I got married to be the third best day of my life. Fourth best was Super Bowl XXXI, so you know how big of a deal September 18, 2010 is to me.

As I was working through posts about vacations and iPhones and anniversaries, I had a brilliant idea. I could write about my wedding! I thought of those two genius sentences up above, and then that was it. Some details are fuzzy, but what can you expect really for the third best day of my life? It was such a brilliant idea though, so I’m just gonna run with it anyway.

We got engaged the day before we were going to move to Ithaca, New York. We were at a wedding, and I acted annoyed most of the day. It wasn’t too much of a reach for me, but I had a job to do on this day. I had picked out the ring on a whim just a few days before. I knew we were going to get married at some point, but hey!!!, I could just buy a ring.

I had the ring in my pocket, and I had to get this woman away from this wedding. Finally after enough pouting, we were off. We went to a park near where she played softball, and I started in on a very grown up conversation about relationships and partnerships or something or other. Before I was done, she knew why we were there. By the end, we were engaged to be wed. That’s a thing people say I’m pretty sure.

Wedding planning was pretty easy. The main challenge was that for most of it, we were in New York and the wedding was going to be in Wisconsin. Whatever, that was fine too, just a minor inconvenience. At one point, however, we went to a bridal shop in Syracuse to get some ideas. We told the lady what we wanted to do for colors, blue and orange, and she told us that wouldn’t look good together. She obviously knows nothing. I lost a lot of respect for that random lady that day.

I had a very basic outline to work with here, and I just realized it was all about the reception and not the actual wedding. So wedding stuff, wedding stuff. Umm. It was a wonderful ceremony. The bride was beautiful. The groom handsome. The blue and orange looked great. We didn’t do a unity candle, but used sand instead (blue and orange). Sidenote: I get the general point of unity sand, but I didn’t realize the depths to the meaning.

The pastor that we met once before 9/18/10 said some words, we put rings on, kissed, and boom. Marriage.

Picture time!!! I hate wedding pictures. Hate’s probably a pretty strong word, but I don’t care for the fake lovey dovey stuff. This applies to engagement photos too, but I digress. So not a fan, but we had some fun with ours. For starters, you do this shit with your best friends, so that’s cool. That’s fun. We ended up at a park. The adult kind, not the kid kind, so an optimal photo locale. While we were there, some guy was fishing and had just caught something. I don’t know if it was a muskellunge or sturgeon or some other fish that exists, but it was pretty big. Obviously we got a picture with him. There were also some zombies hanging out in the area, which was alarming. Turns out it was actually just humans dressed up as zombies and they were shooting a video for some Halloween thing. So the bride and bridesmaids got chased by some “zombies” and were put into a commercial. So it wasn’t all bad.

I don’t know why bridal party entrances are a thing, but they are a thing. We didn’t do something awesome like come in to a Chris Brown song, but of course we did our own thing. I wanted to enter to the Mortal Kombat theme song.

That got nixed for some reason (it became the end credits song on our wedding video instead, thanks Uncle Mike). Instead of clinking glasses at the reception, we brought in a hockey net and people had to score a goal if they wanted to see me show any sort of affection. So we played off of that for our entrance and the bridal party had bats and hockey sticks and formed a tunnel for us. This was our tune.

There were some pretty great speeches. The gals were more heartfelt (although one of the maids of honor dropped a bomb on me) and the guys went for the humor. One of the best pictures from the day shows stunned entertainment as one of the best men is going through his spiel. Obviously speech time was where I was gonna shine. And shine I did. It may or may not have been a little long (it was) but whatever. It’s my wedding and I made you laugh so deal with it.

The cake was delicious. We never paid for the whole thing. We put down the original deposit, and come gameday we got our cake. Makes sense. It didn’t have fondant on it like we wanted though. It still looked cool and tasted great, so we lived. Our running theory is that it was made incorrectly and the baker realized it so never sent us a bill for the remainder. Not really sure, but I got half-priced cake. Win-win.

The rest of the night was a bit of a blur, and that was probably the beauty of it all. There was an open bar for most of the evening. Thanks mom and dad! Now when I say most of the night, I mean the whole night. There was a miscommunication on the venue’s end that led to unlimited booze. That meant another payment issue. I’m not gonna get into that because we’re starting to come off as some cheap assholes here. And I am not cheap.

There was fight that made the news from another wedding at our venue. Drunken debauchery continued downtown post-reception. And we had some silverware and custom Oakleys stolen the next day out of a vehicle. All-in-all a successful event.

10 years is considered to be a milestone anniversary. It’s cool and all, I just think it’s crazy it’s already been that long and I like the number 10. (We almost got married on 10/10/10, but that was a Friday in October. You’re welcome.) Married or otherwise, the Mrs. and I have been together for 20 years, so the wedding ceremony was a formality really. That didn’t make it any less important or special. It was just always going to happen.

So here we are, 10 years later, looking back on that day. There’s a reason all of the stuff I thought about at first wasn’t from the actual wedding. The love was already there regardless of some piece of paper (brownie points through the roof there). What made the day really great was all of those people that we were able to spend the day and night with, and occasionally poke fun at while holding a microphone. It’s those people and those moments that helped make September 18, 2010, the third best day of my life.

*Forgive the blurry pic at the top. It was a long time ago bro.